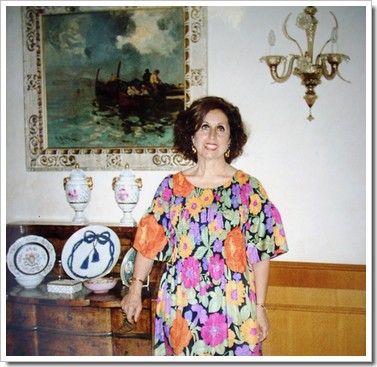 Giovanna has dedicated her life to the art of painting on porcelain and has been working in Rome since 1967.

Giovanna has been attracted to this particular art form since she was a young girl. She completed her degree in Political Sciences at the University of Rome while pursuing her love of art.
After years of apprenticeships, she has improved her technical knowledge of sketching and painting and developed her own artistic sensibility.
From the ages of 20 to 30, she studied under a number of capable teachers, including Adina Failoni and the Protti sisters, all of whom she remembers with affection.
To deepen the knowledge of the subject she has participated in seminars and stages in Italy and in other countries, held by internationally reknowned teachers including Peter Faust, Stephen Hayes, Gigi Branch, Mario Watanabe, Carlos Spina, Brigitte Ceppi and Patricia Arvieri.
Giovanna specializes in decorative painted porcelain pieces in different styles  from the Classical style (Meissen Herend, Sevres, Dresden, Limoges, Nyon), to the Oriental (Chinese, Japanese, Indian) and finally the Modern techniques (including excavation, relief, soft oil, false incision, lacquer, gold, trompe loeil, ). The various modern techniques are the same ones used by the manufacturers of painted porcelain.

In her forty years artistic career Giovanna Melodia has sharpened her traditional techniques, experimented with old ones and developed new ones, and has become well-known and appreciated in Italy and around the world. Her work has been exhibited in prestigious shows and recognized with important awards in Marseille, Paris, Madrid, Bangkok, Abjdian (Ivory Coast), Zurich, and Cairo. At the International Meeting at the House de Vacas Parque of the Retiro, in Madrid - April 1997, she received an important prize for use of the modern technique. The members of the jury included: the President of the Spanish Antiquities, Princess Ann of Orleans and the Conservationist from the Prado.
One of her works is on permanent display at the Museum of the Kiln Villa Vertua in Nova Milanese which houses a collection of over 350 pieces by Italians and foreigners. She has also exhibited with Country and Company and Romasposa.
She is a member of the A.I.D.I.P. (Association Italian Decorators and Teachers of Painting on Porcelain) and to the U.N.I.A.R.T.I. (Union Italian Artisan Artists). She also holds courses in English.
She is associated with F.I.D.A.P.A. (Federation Italian Women Arts Professions Business).

After having cooperated for several years with a studio in Rome( Via Bocca di Leone), she opened a her own laboratory (Verde Oro, Via Metauro, Rome) where she has operated since 2002.
She currently meets guests at her studio by appointment to show her latest creations as well as photographs of her vast artistic production.